When considering social work involvement in the genital integrity movement, it is important to recognize the unique perspective that Social Work offers as it recognizes people in their environments. Social Workers can help to illuminate sexist discourses that contribute to forced genital cutting that protect girls but not boys. Social workers can bring about post-colonial, critical lenses that display the colonial occupation that medicine and religion impose on infant bodies. Workers can help to speak to the operations of branding and abuses of power that are oppressed on infants through the cutting procedure. Social Workers can also help to illuminate the history of forced genital cutting and situate it in the histories of sexual regulation and the histories of the ownership and commodification of children. When these environmental operations are connected to the practices of forced genital cutting, the political structures that influence personal lives can be unveiled.

Social Workers also make efforts to serve vulnerable populations with recognition that people who experience vulnerability do not often get equal access to resources. This effort becomes pertinent to the genital integrity movement as the population at the centre of concern are infants and infants are the people in our community who experience the most vulnerability. They are people who have no voice, no collective power and no physical ability to resist the medical and cultural acts that are performed against their bodies. The defining power that is not accessible to infants is taken up by institutional authorities and those authorities continue to fail in the protection of children. What results are generations of people throughout the globe who are stripped of their right to genital integrity through the act of forced genital cutting.

Social Workers can assist populations who are affected by forced genital cutting at all levels through encouraging deconstruction of this taken for granted practice. This deconstruction can occur through the use of open ended, intentional inquiry. Please feel free to offer the following questions when engaging with paediatric authorities, health professionals, parents and other community members:

What would be missing in your community if all members in your life had the same right of integrity to their genitals? If you did find that something was missing what alternatives could you imagine to be put in place that would be most dignifying of all members?

Questions like these can help to encourage a critical lens for stake-holders at all levels of involvement in committing to the ending of forced genital cutting. Beyond providing a critical lens to stake-holders, the future of social work in the genital integrity movement should involve social work inclusion in paediatric policy development, facilitation of conversations with individuals and family members who have experienced trauma from forced genital cutting and facilitation of foreskin restoration groups. With the potential of various avenues of involvement, social workers can offer significant possibilities in the genital integrity movement, and ultimately, the protection of infants.

As social workers in the post-modern age, where we have the benefit of well over a century of social work for us to draw upon, it is important when acting in a position of privilege and power to first acknowledge our own self-location and personal histories and how they may impact our practice and how we interact with people who may be seeking education/information and various degrees of counselling services. First and foremost the role of the social worker should be as agents of change and, as such, to be conscious of any paternalistic ideologies that may lead us to believe that it is possible to know what is best or right for any individual. Social workers should not use their standing as professionals to influence individuals one way or the other.

The position of the social worker places us in unique and strategically important position in the lives of families and the role of the social worker may be quite different from the role of other human service providers and healthcare professionals. As we move towards a practice that engages in a process of ‘informed not-knowing’, we are freed to ask questions from our service users and help uncover the unique and personal truths in each of their stories. Historically, social workers have committed horrendous atrocities in the name of social progress and ‘helping’ in order to further their own agendas, which at time may or may not have been congruent with current political discourse. In a truly client-centred model, it is necessary to be transparent in practice and to work collaboratively with clients to discover what it is that the client is seeking and to support them in whatever it is that they feel is right for them. While radical social work asks us to push the boundaries and ask “what is oppression”, what is the history or stories that make up an issue and how does the social worker play a role in perpetuating the cycle? It is extremely important that social workers allow the people seeking our counsel the right to make up their own mind about the issue. While “harm” may seem obvious by our own definitions, the opinion of this writer is that to define harm for another individual denies that individual’s rights to self agency and also fails to involve the not yet viable voice of the infant children whose rights may not yet be fully acknowledged by the state. The appropriate course of action is to provide sound evidence-based, practical information and allow an individual to form solutions which at the time meet the needs and the needs of the child.

As social workers encounter multiple stories and infinite combinations and diversities in peoples lived experiences, an anti-oppressive practice philosophy asks us to be conscious of how we approach people whose lives may have already been impacted by routine infant circumcision (RIC) and other forms of forced genital cutting, possibly involving intersexed babies.. This may take many forms but attention must be given to care-givers who have already made the decision and followed through with the circumcision of a previous child and are only now just now seeking further information and guidance around the subject. The social worker must be aware that in seeking guidance, this might develop into a shaming or guilt filled process and care-givers may feel that they have made or may be making the wrong decisions for their children. The social worker does not work to change the mind of those in crisis and as professionals we are not a long term solution. The social worker should therefore do their best to provide the most appropriate support services to aid each family on their path and make appropriate medical and additional community referrals where necessary. 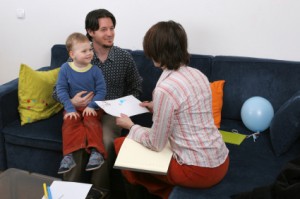